Nerf pistols are a great way to have fun, plus hunt down zombies. They can be used outside or inside, and even in the water. These toy pistols give off a truly space-age appearance. Moreover, how fast and how far they shoot are a couple of the features you can consider when deciding on the best Nerf pistol.

Here is a list of the six best rated Nerf pistols available on the market. It mentions some special features of each model, plus some advantages and disadvantages. Every one earned excellent customer reviews, and your list is in reverse order finishing with the best-rated pistol.

The first choice in your list of the best Nerf pistol models is four shot zombie eliminator. This Nerf gun will launch four strike darts with every quick pull of the trigger. You can short design that can be controlled with one hand, or tightly grasped with two for extra precision.

Pros
The Nerf Doomlands 2169 Persuader Blaster has a transparent load area to view the strike darts and watch the firing action
This is a hammer-action blaster allowing you to empty the four dart chamber in an instant
The hammer and chamber distance is short, enhancing the power for a longer shooting range
Cons
When the strike darts are not loaded tightly, the pistol will fire more than one at a time
You have to keep the chamber level, or tilted upward to keep the darts from falling out

The next highest rated choice on your list of the best Nerf pistol models is a triple threat in your hands. It has a three chamber firing system for fast attacks. This pistol also has the best distance rating.

Pros
With a triple load chamber, this is the best Nerf pistol for taking out multiple zombies at one time
The Nerf N-Strike Elite Triad EX-3 Blaster knows which of the three chambers is loaded and ready to fire
The cocking handle makes it easy to load for your next shot
Cons
While it has a triple load chamber, it only comes with three strike darts
When one of the cylinders jams, the gun will not fire from any of the chambers 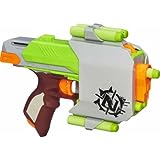 Being the first to the draw is how you win zombie games. The Zombie Strike Blaster has a shoulder holster, so you can be on the move with your hands free. The holster also has a clip to attach to a belt.

Pros
This Nerf pistol is designed for the fast draw, quick strike capability of zombie games
The Nerf Zombie Strike Sidestrike Blaster has four quick-load darts and a shoulder holster
There is a dart storage compartment on the Sidestrike blaster to hold your darts
Cons
The cocking mechanism can be difficult for younger children
This is only a one-shot chamber, so you must reload on the run

The third highest rated in your list of the best Nerf pistol models is a mini version of the Nerf Blaster. This is a smaller pistol design that is easy for children to handle or adults to use to show off their aiming skill.

Kids and adults love to play zombie games. This is the ultimate Nerf zombie eliminator. It has a modern design and you can hold it like a pistol, or grip it with both hands. The hammer shot action has an excellent shooting range, so you can hit your zombies without getting too close.

Pros
The Nerf Zombie Strike Hammershot Blaster has five zombie strike darts, plus zombie strike stencils
You can hold this pistol with one hand, or grip it with both, to rapid fire using the hammer-action blasting
All the best Nerf pistol models are made using safe, non-toxic materials
Cons
The trigger can be stiff and difficult to cock
There was a tendency to misfire, and some had difficulty aiming this pistol 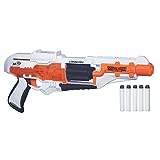 The final selection on the list of the best Nerf pistols is the biggest option. This is a long arm model with a visible loading chamber. The chamber holds five darts and flips open to load on the run.

Nerf pistols can be a blast for kids and adults. There are dozens of different designs, but these are the six with the highest rating according to the customer reviews. If you’ve used one of these best Nerf pistol models, let us know how you liked it. Let us hear about any pistols you think we should have included on the list.

The Best Budget Running Shoes in 2018

This site uses Akismet to reduce spam. Learn how your comment data is processed.